On the cold, wet night of September 10, 1989, a hulking figure was huddled in a phone booth near Chicago’s Wrigley Field. Chris Goss had just finished playing a fraught gig with his band Masters Of Reality at local venue The Cubby Hole, where simmering inner-band tensions had reached a boil. In frustration and desperation, Goss placed a phone call to a buddy in Los Angeles, Delicious Vinyl co-founder Matt Dike.

Chris Goss takes up the tale: “[Masters Of Reality lead guitarist] Tim Harrington and [drummer] Vinnie Ludovico were jazz cats, they had a tendency to play fancy together, and it reached a pinnacle in Chicago where I didn’t know where the beat was, didn’t know where to come in singing. So I walked outside and called Dike: ‘Matt, I can’t do it anymore.’ He went, ‘Dude, get off that tour! Come to L.A., I’ll sign you!’ Matt knew I was signed to Rick Rubin [and Def American Recordings], but he said everything I wanted to hear in those five seconds. For that I’ll adore Matt for the rest of my life.”

Per Dike’s invite, Goss jetted to Los Angeles, where Dike and his Delicious Vinyl partner Mike Ross purchased Masters Of Reality’s recording and publishing contracts (plus rights to their debut album) from Rubin for, in Chris Goss’s estimation, “a mini-fortune.”
Thrilled by their new acquisition, Dike and Ross set about preparing Masters Of Reality for re-release. The album was re-sequenced and re-mastered, including a big boost for the fat-bottomed plonking of bassist Googe. Boogie-woogie piano piece “Doraldina’s Prophecies” was added, as was the Delicious Vinyl logo. To top it off, Dike and Ross took out a sumptuous full-page magazine advertisement in the form of a letter “To All Music People” included the following statement: “An amazing, mystical, rocking experience, the album delivers with a crunching authenticity rarely heard in today’s rock arena. It is, in our not so humble opinion, one of the best albums of the last ten years.”

Chris Goss formed Masters Of Reality with Tim Harrington as a two-piece in Syracuse, New York in 1981. A Warner Bros. pressing of Black Sabbath’s fearsome 1971 LP Master Of Reality with misprinted labels that read Masters Of Reality gave them their name. (Goss: “Nobody listened to Black Sabbath in 1981 if they considered themselves cool.”) Copping the sonic assault of No Wave duo Suicide, Goss and Harrington gigged regularly at CBGB under a smutty black light haze, before expanding to a four-piece and adapting Black Sabbath’s blues-based evil deeds template as their own.

After hearing Masters’ demo tape, Rick Rubin went to see them play at Lower East Side hole The Pyramid in late 1986, and signed the band to Def Jam — a label synonymous with rap, but which, at the time, also boasted Slayer and Danzig on its roster.

Chris Goss: “We had our signing party at this great restaurant below Canal Street, long gone now, called Exterminator Chili. The day of the party we’d been recording at Chung King Studios with Rubin, so we get there, haven’t eaten all day, and can’t get in it’s so jammed. We go in the back door into the kitchen where there’s a tray of brownies, and I start eating ’em up. Rick says, ‘They’re hash brownies’ and I say, ‘Don’t worry, they’re delicious!’ All I remember of the party was when Chuck D and Flavor Flav came up to congratulate us, it was like one of those Jacques Cousteau specials where he’s in a muddy river and can’t see the fish until the last moment when they pass in front of the lens. Except instead of fish, it was Flavor Flav swimming into view from the murk…”
Before Def Jam could release Masters Of Reality, Rubin broke off from his partner Russell Simmons and founded Def American, taking Slayer, Danzig, and Masters Of Reality with him. In 1988, Def American released Masters Of Reality, but then, as now, it would be hard without foreknowledge to pinpoint the year of the ageless album’s creation.

At the time, prominent strains in rock ran from Poison’s poodle-haired pap, to Guns n’ Roses’ screech owl anthems and Slayer’s brain-battering blitzkrieg. The Pacific Northwest-based flip of that dirty coin boasted both Mudhoney’s dressed- down Iggy-isms and the almost-ready for prime-time disaffection of their Sub Pop label mates Nirvana. None of those bands had much in common with Masters Of Reality. Only a pre-makeover Soundgarden were busy mining a blues-wise riffery that had some kinship to Masters.

In a 1989 cover story on Masters Of Reality in Kerrang! magazine, Tim Harrington proclaimed, “There’s a lot of metal bands out there who don’t have any blues base whatsoever, and I really don’t enjoy that stuff too much ’cause it’s not built on the old influential roots that are responsible for its existence.” Goss added his own assessment of such time-worn progressions: “There’s a lot of evil and beauty in those notes and it’s good for kids to get familiar with it.”
Masters Of Reality’s lead single “Domino” is a flat-out rabble rousing rocker, Goss serving up Tony Iommi-style sickness while in his pure but potent tenor commanding the listener to “Paint me a picture/ make it the devil/ then run down the hole if/ the roof ain’t level.” “Lookin’ To Get Rite” is a concise and country-fried front-porch toe tapper, while “Kill The King” is a seven-and-a-half minute regicidal epic roping in the legacies of Queen, King Crimson, and ZZ Top. Most impressive is “John Brown” where Goss brays “I declare a holiday…no matter what the doctors say” over a full-bodied realization of the sort of acoustically- strummed bombast that Led Zeppelin had pioneered with “Over The Hills And Far Away.”
Fans of Kyuss and Queens Of The Stone Age should recognize the name Chris Goss. As godfather of the California desert rock scene that blossomed in Joshua Tree, Goss produced three thundering Kyuss LPs as well as QOTSA’s breakthrough album Rated R and their Grammy-nominated Era Vulgaris. The Masters’ legend has grown stronger ever since.

This deluxe edition double-CD & vinyl LP reissue encompasses the two Masters Of Reality albums in the Delicious Vinyl catalog: the self-titled debut LP and 1997’s How High The Moon: Live At The Viper Room.
Completists and come-latelys may want to know this reissue maintains the self- titled album’s track sequencing from the Delicious Vinyl version, which includes the song “Doraldina’s Prophecies” (produced by Chris Goss, Matt Dike & Mike Ross) not found on the Rick Rubin-produced Def American release. The original Def American cover art has been restored. Longtime friend of the band and current Masters Of Reality drummer John Leamy’s painting The Blue Garden is seen in its full glory on the 8-panel digipak (as well as the bonus poster). The song “Magical Spell” is returned here to its majestic five minute lascivious trawl, missing verse, guitar solo and all. As for the second disc, How High The Moon: Live At The Viper Room has been out of print for years, and never been available on vinyl. Its standouts include “Jindalee Jindalie” (featuring special guest Scott Weiland) and a romp through “John Brown” that betters the already awesome studio version.
If you’re so moved, recognize that Masters Of Reality remain to this day an active, potent proposition both on tour and in the studio (check out their incredible 2009 album Pine/Cross Dover). Rock on. 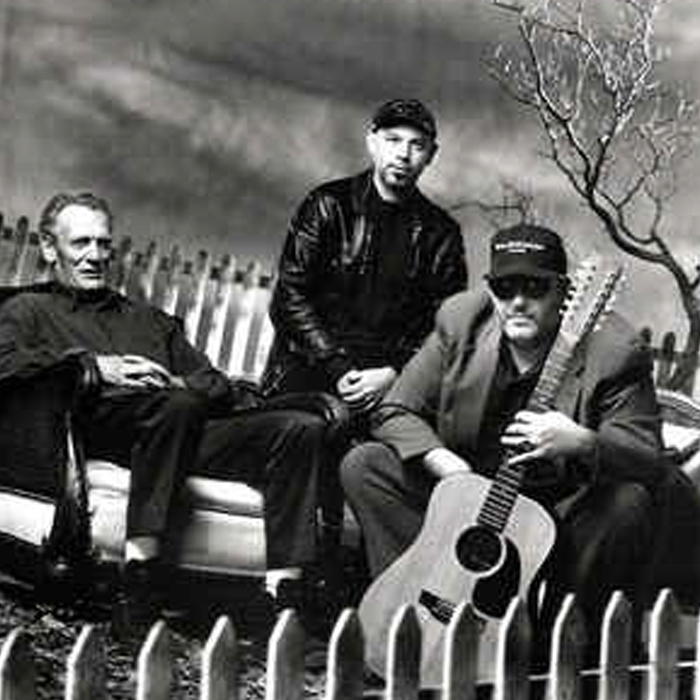